I have a thing for old books and libraries.

Cool books and where I found them: Click on the hyperlinks to see photos!

De revolutionibus orbium coelestium by Nicolaus Copernicus. The version that Harvard has is from 1617 and is I believe the third edition, published by Nicolaus Mulerius. Here's the title page ("Now only after the 75 year anniversary of the author's death"), as well as a signature of the first president of Harvard on the book. Of course, then there is the famous diagram: 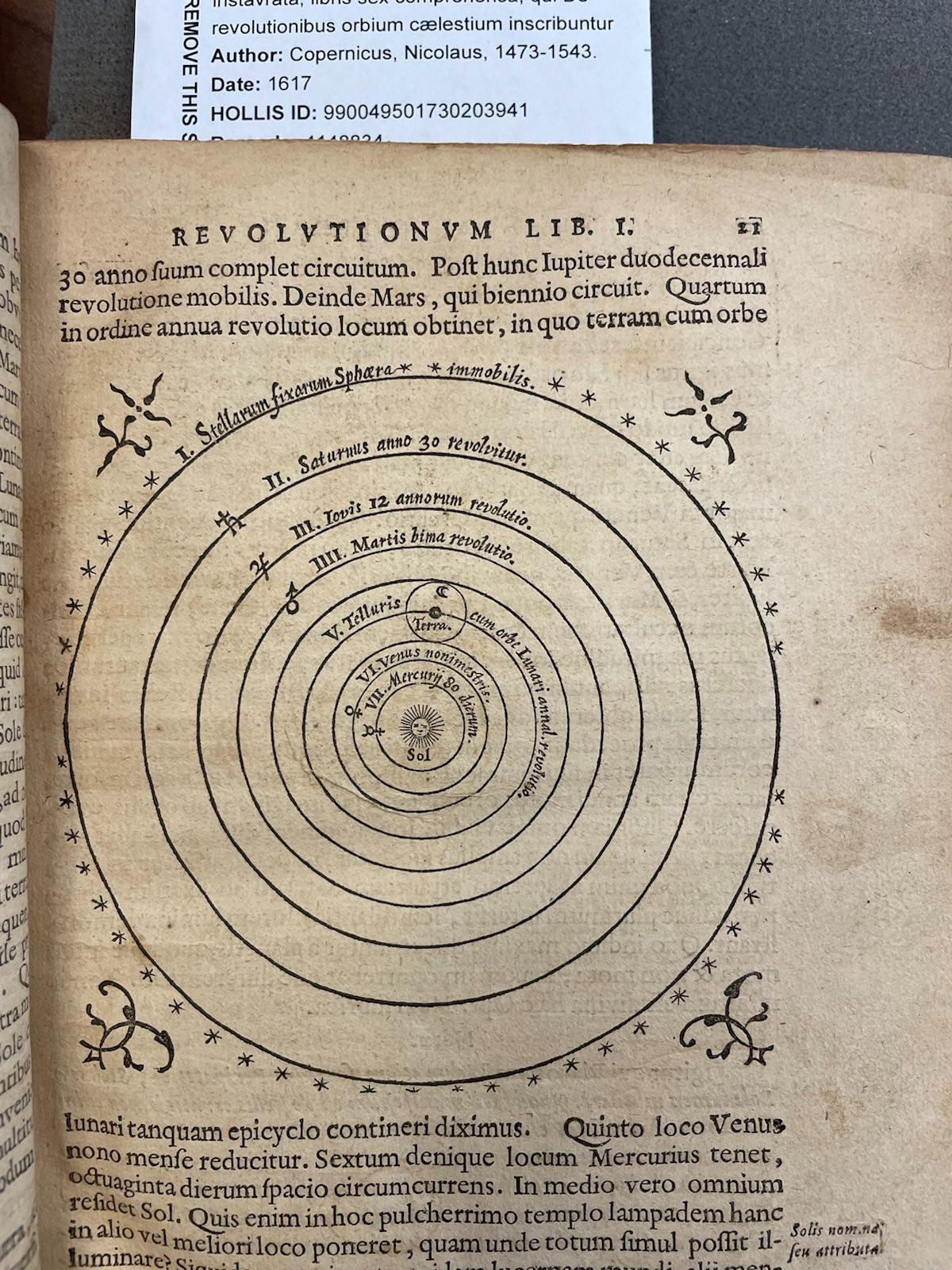 Great experience. Did this like the week before I had to leave

The New Testament of Our Lord and Savior Jesus Christ: Translated into the Indian Language and Ordered to be Printed by the Commissioners of teh United Colonies in NEW-ENGLAND, AT the Change, and with the Consent of the COPERATION IN ENGLAND For the Propagation of the Gospel amongst the Indians in New-England.

Printed in Cambridge in 1661 by our very own Samuel Green. Title page, dedication to Charles the Second main text, and what it looks like on the outside. Holding the book made me feel like an early colonizer. It's like a movie prop, except it's not the prop, it's the ORIGINAL. FROM 1661. PRINTED IN THE COLONIES. SO COOL.

The History of the Decline and Fall of the Roman Empire: My dad has been telling me to go read this classic for quite a while now, so being the absolute based chad that I would like to think of being, I went to Houghton library and got a hold of one of the first editions from 1787. The cover is basically a piece of paper at this point. However, it is completely readable and a perfectly functioning book. I read several chapters before stopping. I felt like the book lacked focus and a compelling enough narrative for my taste. Like, it's cool that you're talking about how the Roman army is well trained and everything, but I don't really need to know that, and I didn't feel like knowing that helped me. I feel like one would have to find the history of Rome to be inherently interesting to really like the book.

Communist Brochures: Ok so I was writing this paper for Ec 1080 and stumbled upon these brochures (in French) from the Marxist Library of Paris. They are so cool. Take a look at the introduction for the fourth book, Planisme et Socialisme. In the beginning, it talks about how the capitalist system has recessions every ten years or so, and then in 1929 "the capitalist world entered an unprecedented economic crisis." It goes on and states that these crises are "born with capitalism itself; they are created by the growth of the capitalist system, and the only way to end these crises forever is the abolition of the capitalist system itself and the institution of a socialist economy." Doesn't this remind you of the rhetoric surrounding defunding/abolishing the police? That's pretty damn cool.

Law of Large Numbers: Condorcet (1785) talks about how, if voters have a less than one-half chance of getting something right, then society as a whole would almost certainly vote for the wrong choice, and thus "it could be dangerous to give a democratic constitution to a group of stupid people". See original: picture 1 2 3. I read the book at Harvard Houghton library, although it is also available online through the French National Library.

The Van De Velde's: I go to meetings for the Harvard Undergraduate Art History Society, and one of the things we do is bring in paintings that we are interested in to share. One week I picked Dutch Ships in a Calm Sea by William Van De Velde the Younger (1665 Oil on panel): 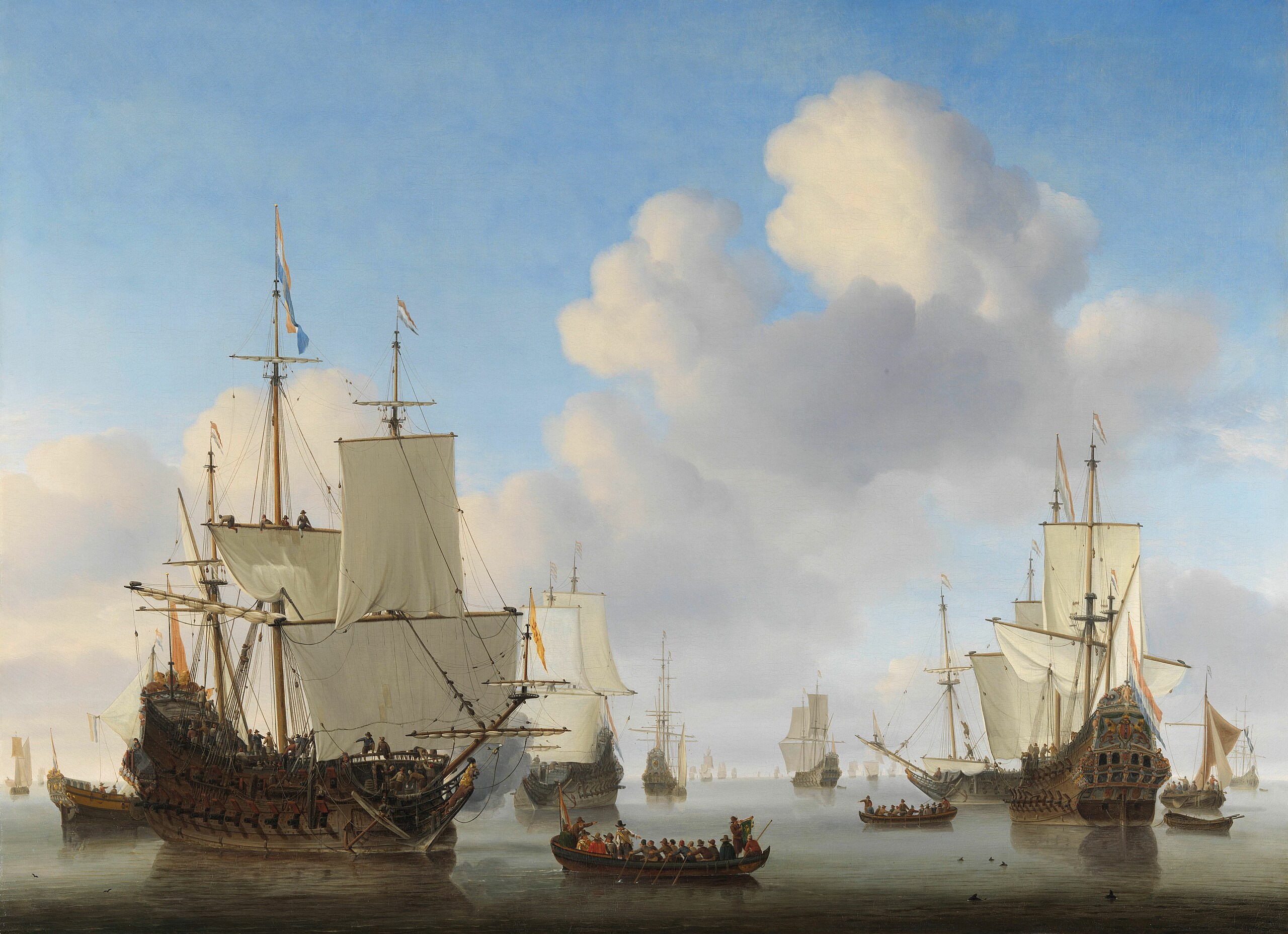 So to learn a little more about the artist I head over to the Fine Arts Library and found this pretty book published in 1892. It's falling apart in a lot of places but still very much readable (with a little help from Wordreference lol). And it is actually a very useful source! For example, it talks about the relationship between the Dutch and the sea: The sea is a danger to the low altitude country, but it is also a source of pride and revenue (through the Dutch East Indian company). Dutch painters created this special, nationalistic genre for painting ships and the sea. William Van de Velde's father was the official painter for the Dutch fleet at the request of the Admiralty Council. "Non content de suivre les manœuvres pacifiques de l'escadre, il assistait même à ses engagements avec l'ennemi" ("Not satisfied with following the fleet, he also helped out during engagements with the enemy") (p.54). That's right, during the Four Days Battle , he was on a small boat and recorded the battle and helped the navy trace what happened afterward. That's pretty cool eh? (p 54 55).

I don't really remember what this and that is... but they are very pretty. From the Qatar National Library

A New Account of the East Indies by Alexander Hamilton (no, not that one, the sailor) from the National Library of Singapore

Saw this at the Claremont college libraries

How I got into old books

I was first intrigued by old books in December 2018 when writing a long art history paper. I was looking at Edvard Munch’s The Scream, and stumbled this book at the Seattle public library about Munch by Thomas Messer. Messer wrote that Munch went to the Salon des Indépendants in 1891 and was deeply influenced by the ten Van Gogh works there, but he didn't mention which ten. So I wanted to look for the exhibition catalog for the 1891 exhibition (SPL had a copy of the catalog in 1927, which was very pretty). The librarian introduced me to WorldCat, and we found out that the catalog is only found in the French National Library and the Van Gogh museum in Amsterdam.
Thus, I went to Paris seven months later (I was going to Paris anyways) and visited la Bibliothèque Nationale de France (François-Mitterrand). They didn't have the physical catalog but a microfilm of it (first time I saw microfilm lol). To get the microfilm, I needed to enter the research section of the library, which means getting a library card. I got one as an "independent researcher" by showing them my college admission letter and paying five euros (I have since started collecting library cards and have around 14 in my collection haha).
Armed with my new library card, I passed through the first gates of the research section. The second set of doors required a “reservation” with the front desk before I was able to walk in. Then, I had to talk to the people in the Art history section of the library, who had to reserve the microfilm on the computer and told me to wait up to 20 mins until the thing delivers through what appears to be a complex system of belts (like the ones at an airport). And behold: 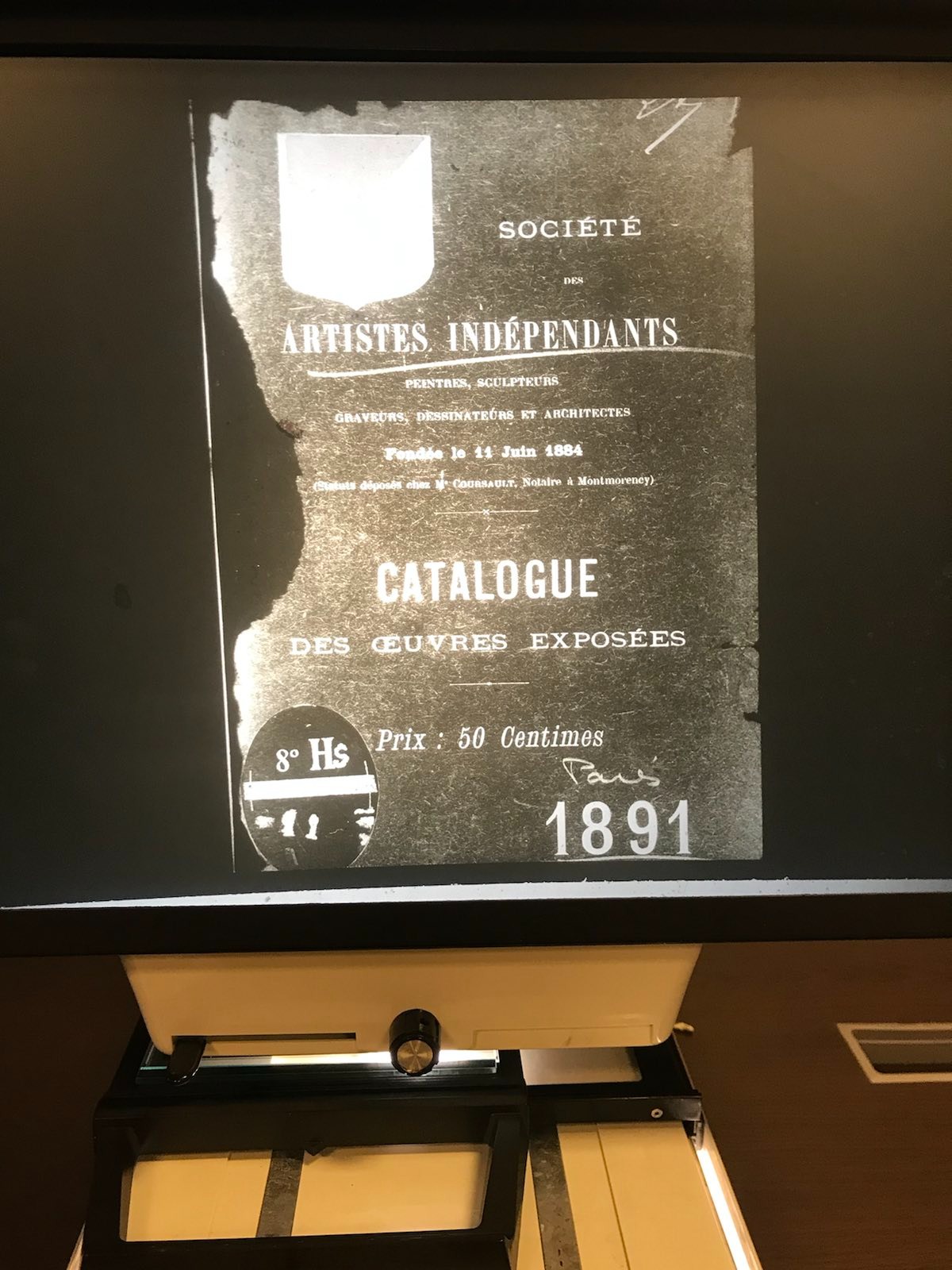 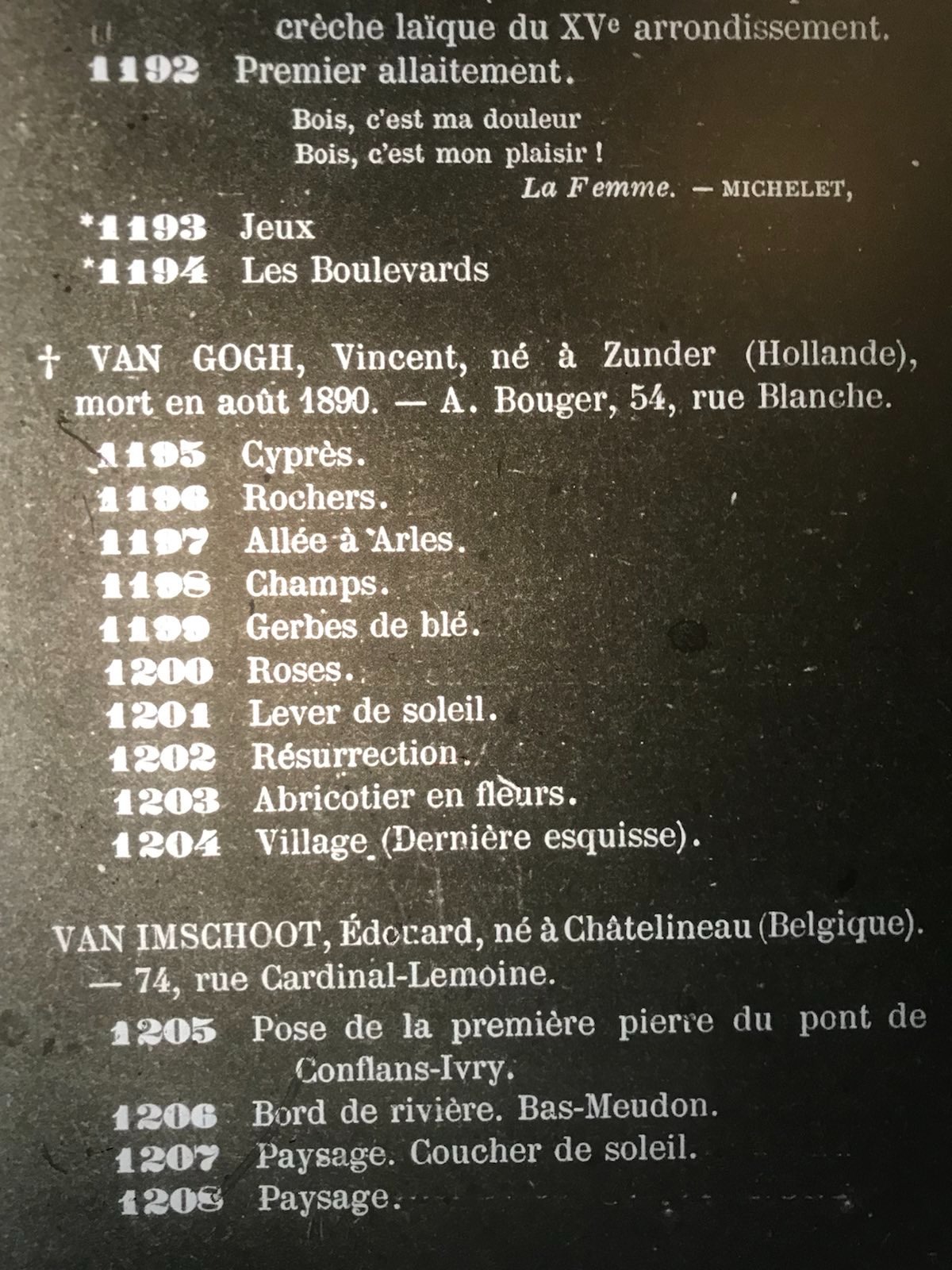 Except we don't actually know which ten paintings these are... Even for those of you who don't speak french, it's clear that item 1200 is a painting of a rose. But which one? Right now, all of Van Gogh's known works have assigned catalog numbers and fixed titles (at least in French), but these standardized titles do not match up with the titles used in 1891.
I also found out later at the Harvard Fine Arts Library that there is this professor in Columbia who complied several of the old catalogs and published them all in one book. So you could have found out which ten paintings were listed without going to Paris after all...
Still, the whole experience felt like a real-life treasure hunt, and I really enjoyed it! This is often the case with Art History research since there are lots of books and information not yet digitized so you really need to rely on libraries and that makes it fun.